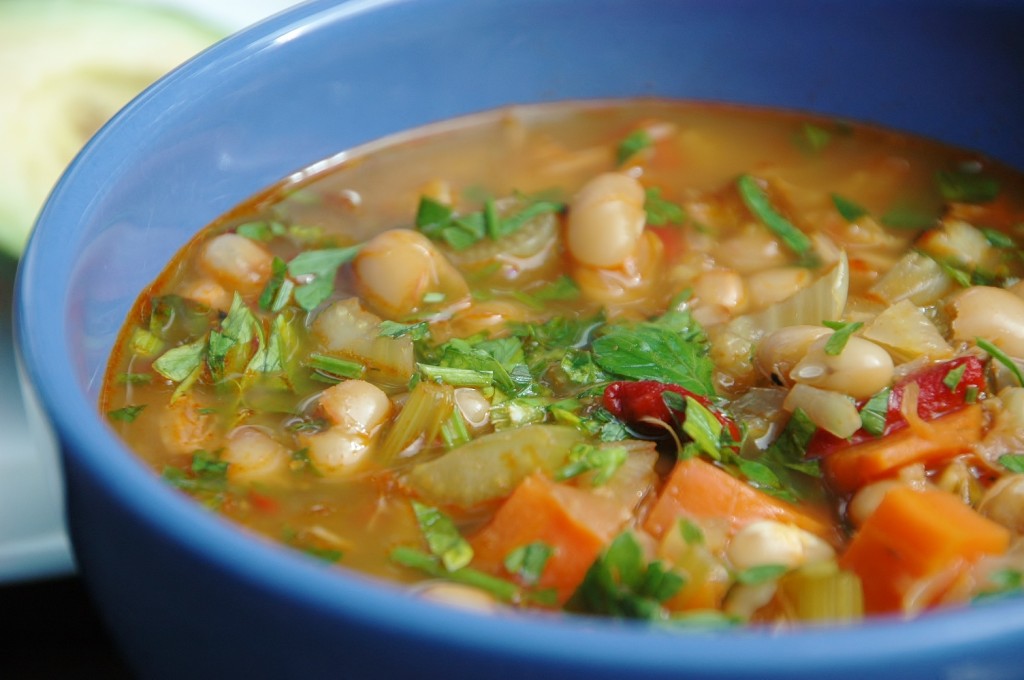 This past week has definitely been colder here in Sydney, so what a great time to start making soup. 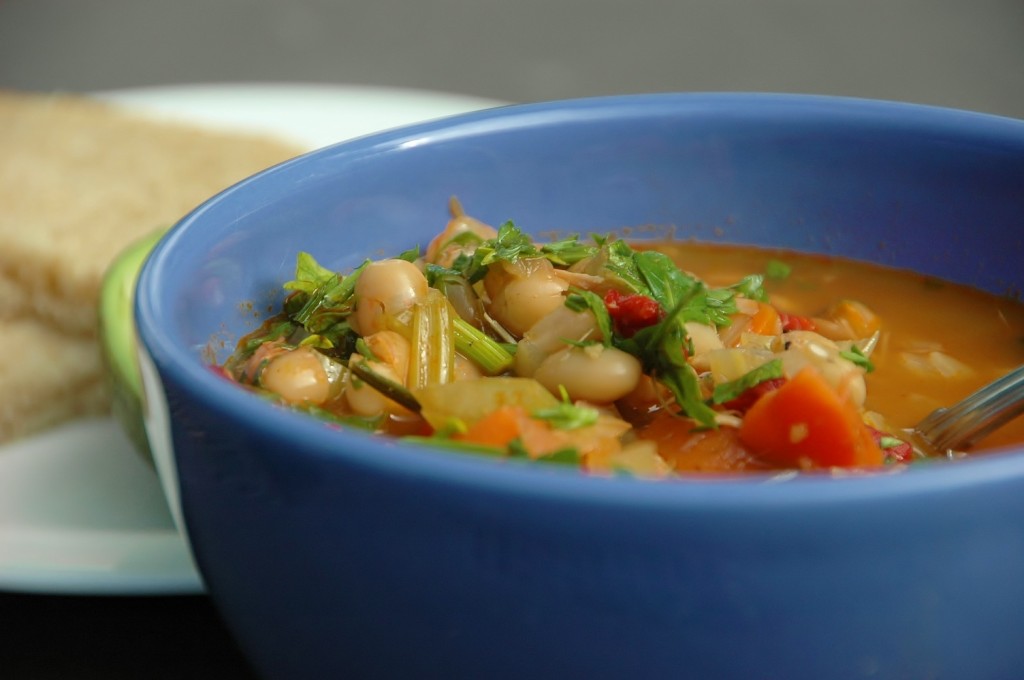 This month’s delicious magazine includes recipes from Curtis Stone’s (a chef, now well known for his Coles supermarket ads!) cookbook.  One of these recipes is a lovely white bean soup with lots of hearty, healthy vegetables.  The original soup recipe also contains chorizo, a Spanish style of pork sausage that contains sweet paprika and chilli which gives the sausage its characteristic flavour.  These sausages are particularly high in fat – roughly 30% fat, at least half of that would be saturated fat, and incredibly high in salt or sodium, which is not good for your heart or blood vessels.  Sausages like these are cured, so they are in the processed meat category (processed meat = any meat preserved by curing, salting, smoking or the addition of preservatives).  Processed meats have been shown through many studies, with overwhelming evidence, to greatly increase your risk of bowel cancer and a recent study in the UK has again found that eating processed meats increases your risk of heart disease by 72% and your risk of cancer increases 11%.  Not to mention that this study showed you are also 44% more likely to die prematurely!  So I would not recommend for any of my clients or you to include any processed meat in your intake. 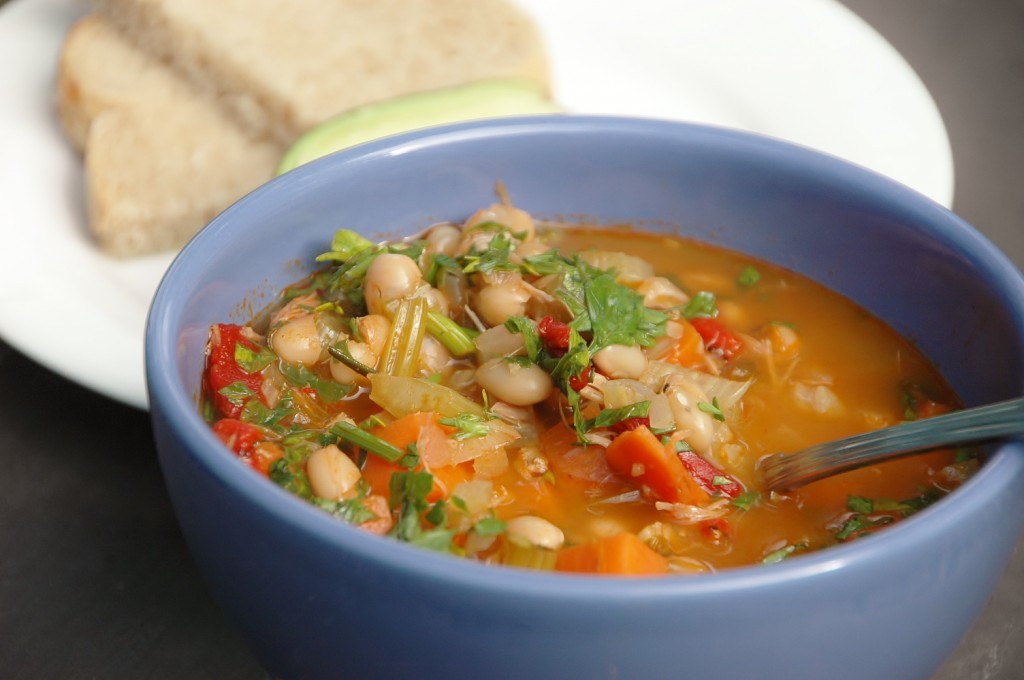 These sausages would be contributing heavily to the flavour in this soup, so I had to find an alternative.  I added sweet paprika* to the sautéing onions and garlic (which smelt divine!), and roasted capsicum in with the beans.  I can’t compare it to the flavour of the original soup with the chorizo, but my version was definitely delicious! 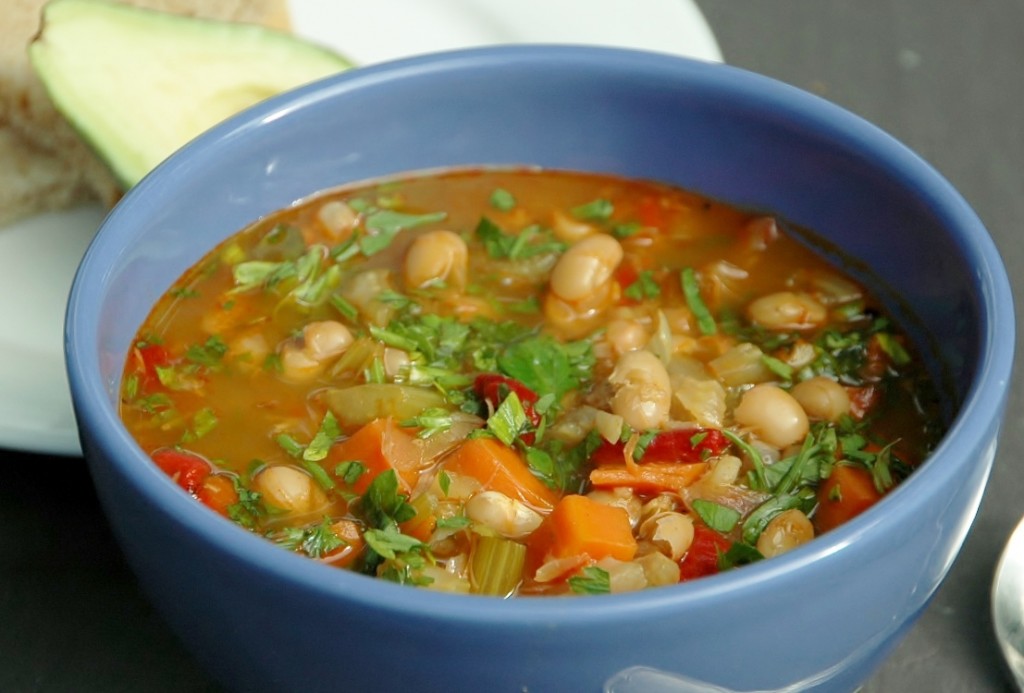 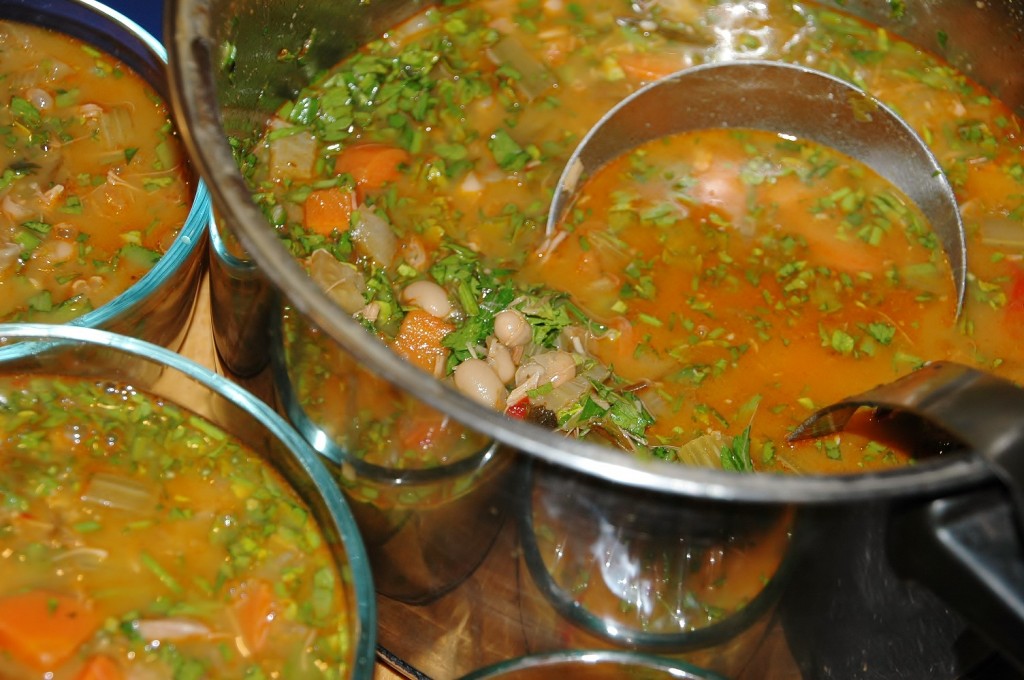 * Notes on the health benefits of paprika from livestrong.com

Paprika is so much more than a colourful garnish, it’s a nutritional powerhouse loaded with health-enhancing benefits. Paprika is a versatile spice that adds depth and complexity to a variety of everyday foods, making it worth a second look as a tool in your culinary arsenal.

Paprika, which is commonly sold as a powdered spice, is actually a type of ground pepper, Capsicum annuum, which is in the same family as chili and bell peppers. This deep red spice can vary in taste from sweet to extremely hot and can also be bought in a smoked version. Paprika was originally grown in South America, but is best known for its use in Hungarian and Spanish dishes. In order to reap its many health benefits, try to use the sun dried, organic type, which is not exposed to the high temperatures of commercially produced paprika.

Paprika’s top benefit is that it is extremely high in vitamin C. A whole paprika pepper is known to have six to nine times the amount of vitamin C as a tomato. Because of its high C content, paprika can help you absorb iron-rich foods and may help your body fight common infections.

Peppers, especially those that are used to produce paprika, are loaded with capsaicin, the phytonutrient that makes them taste hot. Capsaicin is known as a powerful anti-inflammatory, which can ease chronic conditions like arthritis and joint pain. Capsaicin also helps improve blood circulation, thereby improving conditions like cold feet and hands. Paprika also has plant enzymes that can help neutralize stomach acids, thus aiding digestion.