What is Maltodextrin and is it okay for me to eat? 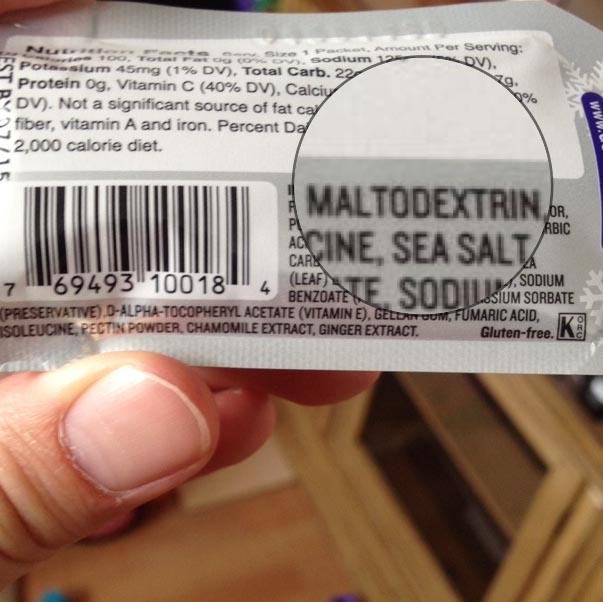 Meet Maltodextrin. It’s an ingredient that appears in thousands of foods, and most of us don’t give it a second thought. Sometimes it’s even the first ingredient, as in this energy gel used by cyclists and runners on long training days.

Here’s what you need to know:

Maltodextrin is a polysaccharide (a type of carbohydrate) that is used as a food additive. It has 4 calories per gram, the same as sugar or any other carb, for that matter. Due to its chemical structure, it doesn’t cause the same blood glucose spike as sugar or high fructose corn syrup do.

Maltodextrin is produced from starches of corn, wheat, potatoes or rice and has a flavor that is somewhere between tasteless to hinting of sweetness. Since most ingredient lists don’t specify the source of maltodextrin, this poses a dilemma for people with celiac disease or gluten intolerance. Wheat derived maltodextrin may contain traces of gluten.

Maltodextrin is very versatile and benign, and is thus well suited for many uses in processed food products. It is used as a thickener for soups, gravies, and salad dressings. It is used as a carb source for sports gels and powders. Maltodextrin is also used as a bulking base for artificial sweeteners. For example, in Jell-o it is used in conjunction with Aspartame and Acesulfame Potassium. It is also the bulking agent in Splenda.

So, is maltodextrin okay to eat?

We are told it is, however, read the following and decide for yourself

Why Scientists Put Your Diet Under the Microscope

For IBD, food plays a role in risk

“Dr. McDonald recently discovered that maltodextrin (modified cornstarch) seems to alter intestinal bacteria, which could present challenges to the normal digestive process. Maltodextrin is a common food additive. Manufacturers use it to improve flavor and texture in many packaged foods.

Another recent study from her lab showed that maltodextrin promotes survival of Salmonella bacteria, commonly associated with food poisoning. Her research indicates maltodextrin can increase the amount of bacteria in your gut and decrease your antibacterial defenses. The problem? This may create the ideal environment for Crohn’s disease to develop.

Other studies have suggested links between Crohn’s and chemicals such as emulsifiers, sucralose and food dyes. In healthy people, small amounts of food additives likely will not cause illness. But heavy use over time can significantly alter the intestinal environment. It may lead to disease in people who are genetically at risk for developing IBD.”

Deregulation of intestinal anti-microbial defense by the dietary additive, maltodextrin.